Hiring Employees in China? You Better Start Preparing for the Upcoming Tax Reform

An upcoming tax reform is keeping expats in China, as well as many companies who hire foreign employees in China, awake at night. Lately, this tax reform has been at the heart of each gathering of the international community in China, and most seminars and webinars focus on its implications. Keep reading to understand why:

Over the last 20 years, China has done many things in order to attract foreign investments – from creating preferred conditions for foreign companies that open branches and/or factories in China, to incentivizing expats who relocated to China with their families to work for foreign companies operating in the country. As a result, foreigners have flocked to China. During the peak period, between 300,000-400,000 foreigners resided in Shanghai. This huge number of foreigners created a “city within a city” of sorts – a fertile ground for the development of services and businesses that support the foreign community.

However, recently we are witnessing a reverse trend, and foreigners are leaving China for different reasons. First, visa regulations have been tightened severely to filter those who do not have a proper job arrangement or relevant job experience. Second, trade wars and political incidents have deteriorated the trade relationships between China and the United States, Canada and Australia. A third factor is a global trend that is also present in China – an increased encouragement to purchase locally made products. In addition, the COVID-19 crisis has left many foreigners stranded out of China, unable to return.

In 2018 the Chinese government introduced a new tax reform. This policy change will officially be enacted in the beginning of 2022, and is expected to affect all companies that hire foreign employees in China. This is currently one of the most debated topics in China’s international business community.

Update: On December 31st 2021 the Chinese authorities announced that the current preferential IIT tax policy would be extended in two years, relieving the pressure on expats and employers in China until January 1st 2024.

In this article, we will attempt to analyze this new reform so that you too can plan your activity in China in the coming years.

What is the fuss all about?

Frankly speaking, for many years foreigners doing business in China have enjoyed lucrative tax benefits, much more than their local counterparts. These included allowances and incentives that were added to their salaries (such as children’s education, rental fees, flights back home, language training, annual bonuses, etc.), and a long line of expenses that were covered by the company. These benefits were tax-free, and therefore expats could enjoy them without impacting their basic salaries (on which taxes was levied). These incentives were introduced to minimize the challenge of moving far away from home and adapting to what used to be a developing country. But China, and especially its main cities, have developed a lot since then.

In addition, some of the expenditures (such as rental fees) were recognized for taxation purposes, meaning they were deducted from the salary for the taxable income calculation.

However, the average foreign family’s level of spending in China is much higher compared to an average Chinese household – and not by choice. A foreign family does not have the option of sending their children to a Chinese school, and therefore the only available option is an international school, where the basic tuition for kindergarten starts at $30,000. In high school, the tuition can soar to $50,000 per child (!). In terms of housing options, especially in big cities and in residential complexes with a high concentration of foreigners, the cost of living for a foreign family is expensive and constitutes a significant share of the expenses.

When it comes to families, rental fees and tuitions are the two most crucial parameters a foreign family takes into consideration before deciding to move to China. A survey conducted in February 2021 by the European Chamber of Commerce in Shanghai found that 45% and 28% of respondents rated the tax-exemption benefits on rent and children’s education as the most important benefits in attracting foreign labor to China. 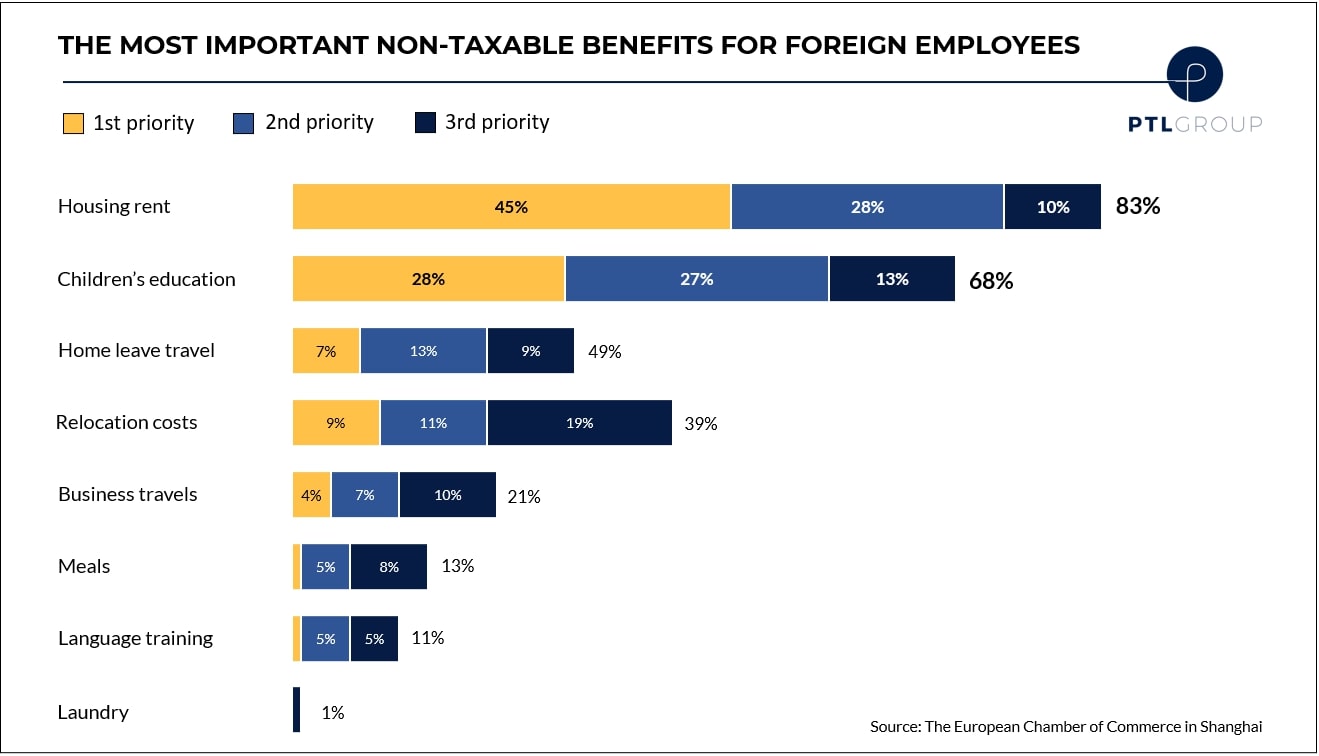 What is going to change and when

After a foreign investment boom in China that lasted for several years, and after the tax benefits have ostensibly achieved their goal, the government is now seeking to re-equalize the status of local and foreign taxpayers. Therefore, the updated Individual Income Tax law stipulates the elimination of the tax-exemption benefit for foreigners in three categories: housing, children’s education, and language training. In their place, a new deduction system will be adopted, which will subtract a smaller portion of the overall income. This regulation is going to take effect in January 2024.

What does this mean in practical terms? Are there ways to prepare?

The most apparent outcome of this regulation is a greater IIT payable by foreigners in China and thus a decrease in their disposable incomes. In some cases, this change can be radical.

The following is an example of a family with two children with an average income and average housing and tuition costs:

Until now, an employee was required to pay 30-45% tax, which was deducted solely from the basic salary (tuition and rental fee are subsided by the hiring company). In practice, this means that the employee pays 30-40 thousand dollars tax.

After the IIT policy implementation, the employee will be required to pay 45% tax (the highest tax bracket) for ALL income sources (salary and allowances combined). In practice, the calculation is going to be 45% X 220 thousand dollars, which amounts to $99,000 in tax liability. This leaves the employee with one thousand dollars to support his or her family throughout the year…

Based on this calculation, families with more than two children will have to pay for the right to work in China, since their cost of living is predicted to be higher than their work income.

Companies in China are expected to experience a significant surge in the hiring costs of foreign employees in China. Although the IIT is a personal tax, the hiring companies will be the ones to bear the costs, so as not to worsen their employee’s conditions and weaken the attractiveness of certain open positions.

Multinational firms in China are not overly panicked by this expected change. In many cases, employees have already paid their taxes in full, whether in China or their country of origin, and will therefore not be affected. In other cases, a marginal cost for a few dozen employees will not constitute a significant obstacle, due to the companies’ significant size.

The companies most likely to be affected are SMEs, which usually employ one foreign manager who liaises between the local branch and the HQ. It is already rather difficult to offer a new manager a relocation to China amidst the COVID-19 pandemic; it is doubtful that a small company that is entering the Chinese market or considering a company registration in China will be able to afford these new hiring costs.

The rationale behind the reform

What is the rationale behind the new reform? There are several assumptions:

One assumption is the government’s desire to create new and lucrative jobs for Chinese nationals who were educated and reside overseas. Many companies operating in China must convince the Visa office that they require a foreign employee for a specific position, and have to explain why a Chinese employee is incapable of filling this role. Yet this process is becoming less and less relevant, due to a relatively large pool of talented and internationally qualified Chinese employees. These employees will likely have an advantage over foreign employees, who have limited command of the Chinese language and culture and lack employment experience in China.

The Chinese authorities claim that a skilled Chinese employee will bring better results compared to a foreign manager, and this is likely to be true. Therefore, they argue that if the foreign employee is indeed vital to the foreign company’s China operation, the company has to make an effort and deal with the financial consequences.

Another assumption is the Chinese government’s wish to guarantee that a foreign company that invests in China is not only an entity with a good product or service, but also has the financial ability to sustain long-term market activity. Each time a new client asks us about the potential of success in China, we explain that China is indeed a huge market, but like a long-distance race, cultivating business operations requires endurance, patience, time and resources.

The reform’s implication on employment in China

If you hire foreign employees in China, it is highly advisable to utilize the time that remains until the end of the year for preparation. This can include budget planning, assessment of eligibility for government financial incentives (such as offered in Free Trade Zones and other preferred areas) and the re-examining of labor contracts and hiring models.

Nevertheless, when the hiring cost of foreign employees in China is on the rise, hiring and training local employees is worth considering. This strategy is highly relevant when it comes to building a local sales team, and will also pay off in the long run.

Here are 5 good reasons to utilize a local sales team:

1) Cultural barriers. This sounds rather obvious but it is fundamentally crucial. A lack of local knowledge and awareness of the appropriate norms can sometimes damage a business and its reputation, more than the value of having a sales rep on the ground would add to it. Local employees will be aware of China’s cultural codes as they navigate all sales or negotiation processes.

2) budget constraints. Changes in China’s tax policies that will take effect in 2024 are expected to significantly increase the employment cost paid by companies with foreign staff in China. A far greater tax burden will be levied on non-local employees.

3) Supply in the local labor market. China has an abundance of highly-skilled, experienced, and professional employees. Many employees who work for international SMEs have studied abroad and speak several languages. It is recommended to hire an experienced local salesperson, who is already well connected with key figures in the industry.

4) A steady rise in local pride. The term “Guochao” is used extensively in China to describe the rising popularity of local Chinese culture, brands and products. Foreign companies operating in China that wish to align with the country’s cultural trends should consider relying on local abilities and resources.

5) Regulatory obstacles. It seems impossible to relocate employees to China in the foreseeable future. Due to COVID-19, China is limiting the entry of foreign employees to China for work, and it does not look like this is going to change soon.

PTL Group also hires foreigners in China, and we are all eager to see how the reform will impact our and our clients’ activities. One thing is certain: it is best to get a move on and start preparing.

If you still haven’t hired a local sales team for your China operation, you are welcome to consult with us. The wide array of services we provide our clients covers recruitment and employment services in China, as well as payroll services in China and budget planning. Contact us today. We will be happy to help. 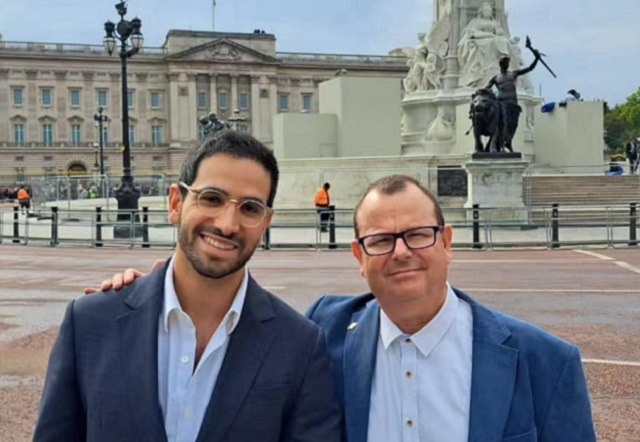 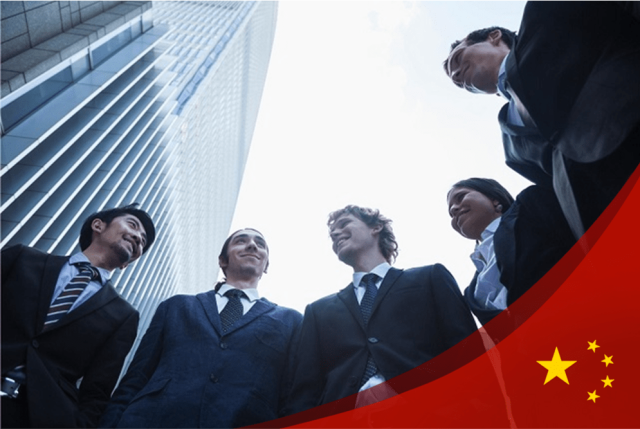