Foreign employees working in China have access to a wide range of financial services in China, but they also have certain obligations. One such obligation is paying tax on their personal income. The following article breaks down this important topic.

Just like in their home countries, foreigners working in China are required to contribute some portion of their salary and add to their employers’ liability. The two most common channels for employee contributions are:

The Social Security system in China consists of four different insurances that are applicable to foreign employees:

The following is a breakdown of the social insurances’ contribution rates paid by foreign employees in three different cities:

Note: Remember that despite similar percentages in some categories, the employers’ contributions in these categories vary.

Social insurance exemption is granted to eligible employees coming from one of the 12 countries with which China has a special agreement: Canada, Denmark, France, Germany, Finland, France, Japan, Luxembourg, Netherlands, South Korea, Spain and Switzerland.

In 2019, China amended the IIT law, a reform that heavily impacted foreign employees in the country. According to the new reform, which will officially come into force in 2024, foreign employees in China should expect an increase in their taxable income. Read more about the 2024’s IIT reform.

The tax payment has to be filed on a monthly basis, by the 15th following the end of each month. The total amount of tax payable is determined by two factors:

Naturally, the longer the taxpayer resides in China, the higher the salary, and so the tax payable increases.

To begin with, foreigners residing in China for less than 183 days are required to pay IIT on income sourced in China only.

183 days is the lowest threshold that turns a foreign employee into a “tax resident”. Those who reside in China for less than a year can still enjoy the tax exemption of overseas sourced income.

The following is a breakdown of the taxable income derived from the length of time spent in China by the foreign taxpayer:

The tax rate changes between different income levels. The following table shows the different degrees of tax percentage (the annual combined income and the quick deduction are in RMB) 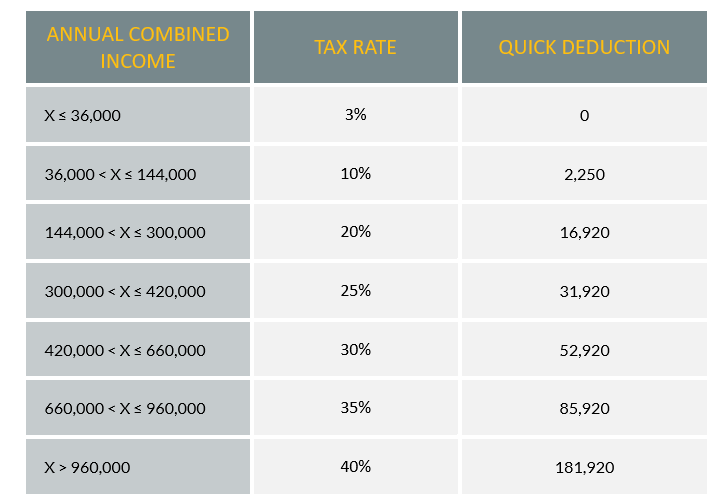 The last stage is the final calculation, taking into consideration the aforementioned data.

At PTL Group, we specialize in financial services in China. Get in touch today and let us support your China operations.

Before your WFOE is officially registered in China, you will have to deal with loads of...

Transfer Funds Out of China

Many foreign companies operating in china feel that profit repatriation from China is a challenging task....